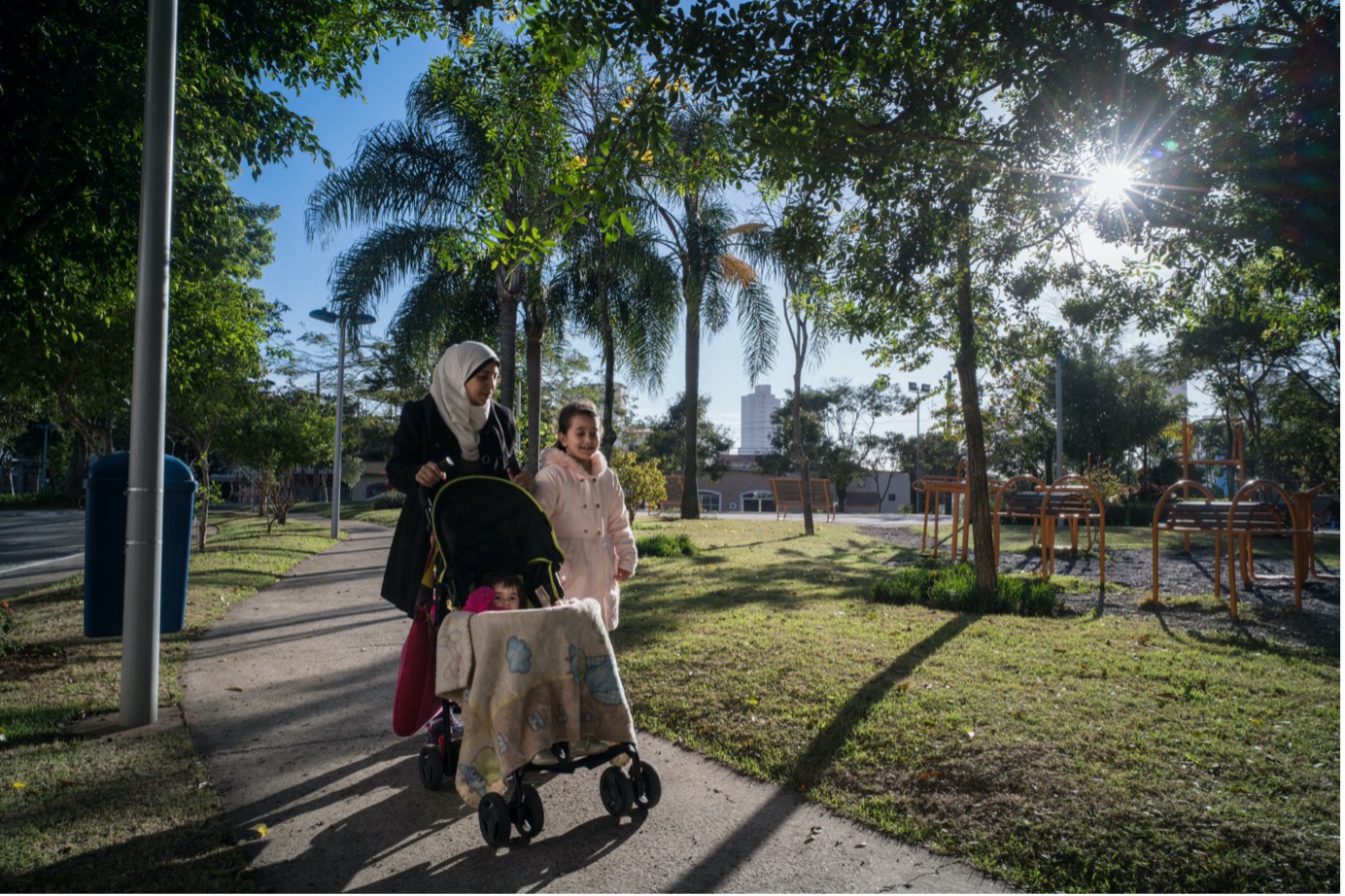 According to the Brazilian legislation, the Federal Public Defender´s Office (DPU) is the institution created to, among other responsibilities, promote the broadest defense of the fundamental rights of people in need, including their individual, collective, social, economic, cultural and environmental rights, and to support all kinds of actions capable of providing adequate and effective protection. DPU’s role of representing refugees and asylum-seekers is anchored in this rights-protecting mandate.

DPU provides legal assistance and representation to asylum-seekers, refugees, and vulnerable migrants throughout Brazil. DPU also works on strategic litigation and carries out advocacy actions. In accordance with immigration legislation, DPU is notified of all cases of expulsion or deportation, so it can provide legal advice and representation to migrants and refugees. In addition, it carries out legal representation and protection analysis of separated, unaccompanied or undocumented children and adolescents at the border, to facilitate entry into Brazil and access to documentation.

The activity of DPU is summarized in:

Within the framework of the refugee status determination (RSD) procedure, the Public Defender participates in the preparation of written or oral submissions when the National Committee for Refugees (Conare) is deciding a case. It also assists applicants in appeals. DPU also acts in criminal cases (foreigners who have committed federal crimes) and expulsion situations. In cases where international protection needs are identified, DPU supports individuals in accessing RSD procedures, including appeals through presenting the facts of their claim or by presenting the asylum request to the authorities.

The assistance provided by DPU is not restricted to defending the individual interests of refugees and migrants within the scope of the administrative and judicial RSD procedure. The DPU Migrants, Refugees, and Stateless Persons Working Group, made up of federal public defenders from all regions of the country, has sought to identify and overcome problems related to refugees accessing education, health and assistance services.

The Working Group also develops activities to inform the refugee population on their rights. Access to justice could be denied for those who are either unaware of their rights or may not succeed in fighting for them in a foreign country. The unknown is the first barrier to be broken down to enable  access to justice and the judicial system.

DPU participates as an observer in the National Committee for Refugees (Conare) within the Ministry of Justice and Public Security. The participation of DPU in Conare meetings, like that of civil society, enables asylum seekers and refugees to be represented by a diverse range of stakeholders in the administrative procedure. The participation of DPU in Conare happens at two stages in the procedure:

The participation of DPU, which is in an observer role with the right to speak, is very important, since DPU has legitimacy due to the broad representation of its members and expertise in matters of federal law, including in refugee law. As such, even thoughDPU does not hold notary authority, DPU is able to represent asylum seekers’ and refugees’ interests, guaranteeing the fairness of the process.

Given the legal competence of DPU to undertake public interest litigation, the institution has been responsible for a large number of collective actions mainly in the interests of asylum seekers  and refugees. On occasions, these actions led to the initiation of legal procedures to challenge decisions of the asylum authorities (such as, for example, the decision taken during the pandemic to prohibit an asylum application for anyone crossing the border irregularly) or other authorities (such as access to public health services, accommodation and access to the banking system for undocumented people).

With the new Migration Law of 2017, the role of DPU was broadened. The new law included a requirement that DPU is notified in all cases of expulsion or deportation to guarantee the rights of individuals in need of international protection. Additionally, at  Guarulhos International Airport (São Paulo) a working group was created formally comprised of     federal prosecutors, public defenders, UNHCR, federal and municipal government agencies, with the support of the Federal Police and members of civil society, to prevent possible cases of return of asylum seekers. In this case, when there are inadmissible foreigners who manifest the need for international protection, DPU program is activated to guide the individual and prevent their return.

DPU accompanies the work of Operation Welcome with public defenders at the border posts in Roraima.

DPU issued Joint Resolution No. 1 of August 9, 2017 with the National Council for the Rights of Children and Adolescents (CONANDA), Conare and the National Immigration Council (CNIg). The Resolution establishes the preliminary identification procedures, care and protection for separated or unaccompanied children and adolescents, and gives DPU the role as administrative representative of separated and unaccompanied children and adolescents in migration contexts, enabling the registration and issuance of documentation for minors under 18 years of age, particularly at points of entry.

DPU is part of the project called “Atuação em Rede: Capacitação dos Atores Involvidos no Acolhimento, na Integração e na Interiorização de Refugiados e Migrantes no Brasil” (Networking: Training of Actors Involved in the Reception, Integration and Internal relocation of Refugees and Migrants in Brazil), which seeks to train the actors involved in the establishment of local policies for the reception, protection and integration of refugees and migrants. This project promotes the training host committees and employment working groups’ members established in the municipalities that participate in the internal relocation programs, managers and staff of shelters, public officials and civil society organizations involved in accommodation, shelter and integration of migrants and refugees.

-Participation in discussions on the Migration Law (2017) and presentation of comments.

-Recommendation to Conare and CNIg regarding the adoption and extension of normative resolutions on the granting of authorization to remain in the country for humanitarian reasons in specific cases.

-In 2012, DPU and UNHCR signed a cooperation agreement for the first time. Additionally, In April 2019, both signed a memorandum of understanding, renewed in April 2022 via addendum for an additional three-year period, with the aim of facilitating joint training and action. The purpose of the agreement is to contribute to the realization of the rights of asylum-seekers, refugees, stateless persons and others who require international protection, ensuring access to justice and broad defense.

The work of DPU has helped to improve the asylum system as a whole by making it fairer and more accessible to asylum-seekers.

Despite the pandemic and the decrease in face-to-face visits, the report of some defenders is that the change to the remote system, with initial assistance and programming by mobile phone, has increased the number of visits and demands in 2020. In particular, there was a large demand for requests for emergency assistance from asylum-seekers, refugees and migrants assisted by DPU.

The specialization of public defenders through the creation of a working group on refugee and migration issues in 2014 boosted the institution’s work on the issue and was essential to enable strategic activities. The constitutional role of DPU, together with its broad presence in the country and its ability to establish networks with civil society, are factors that contribute to the good practices carried out by the institution.

Additionally, greater cooperation with international organizations and other regional cooperation networks, with possible financial and technical collaboration from UNHCR, and capacity building with other public officials will help maintain this capacity and broaden the issue of refugee law.

The work of local protection networks, made up of members of civil society, is also considered essential for the smooth running of the work of DPU. In addition, the participation of the State defense bodies is essential to guarantee basic rights, such as the work on identification and ensuring documentation of separated, unaccompanied and undocumented children and adolescents from Venezuela in Brazil.