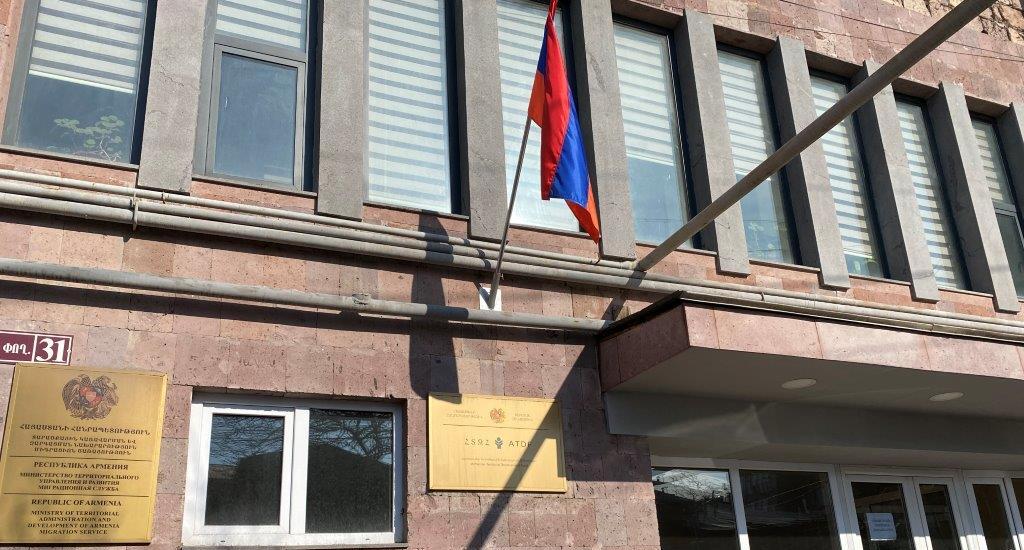 Entities sharing this good practice: Migration Service of the Ministry of Territorial Administration and Infrastructure, Armenia

Submitted by: Armen Ghazaryan, Head of the Migration Service

The Migration Service of the Ministry of Territorial Administration and Infrastructure (hereafter the ‘Migration Service’) is the mandated body responsible for carrying out refugee status determination (RSD) in Armenia in accordance with the Law on Refugees and Asylum.

In March 2020, the Government of Armenia announced a State of Emergency to curb the spread of COVID-19. Due to the precautionary measures, the staff of the Migration Service had to shift to full and partial teleworking for several months. This disrupted the regular mode of access to the asylum procedures, processing of asylum claims and delivery of services to asylum-seekers and refugees.

The Migration Service introduced unique emergency measures in order to ensure the continuity of provision of public services related to reception of asylum-seekers and access to asylum owing to the significant implications this has on fundamental rights and freedoms. While RSD interviews remained mostly suspended for several months because of the global pandemic, as a result of the innovative measures introduced, access to asylum procedures and delivery of key services were maintained and accumulation of RSD backlog was avoided.

Acknowledging the importance of ensuring the continuity of asylum procedures during the pandemic, the Migration Service implemented new procedures clustered into two main principles: securing a continuous proper access to individuals seeking international protection in Armenia while ensuring the enforcement of specific measures aiming at containing the spread of the virus. In this regard, the Migration Service has conducted internal consultations and consultations with UNHCR while introducing the following measures in response to the COVID-19 situation:

-Access to documentation and basic rights and services: Provision/extension of identification cards of asylum-seekers was mostly maintained, including through accepting applications for extension of the cards via email. However, since the teleworking modality could cause certain delays in the provision of the service and in order to ensure access to basic rights and services, an agreement was reached between the relevant State agencies that expired identification cards of asylum-seekers were considered as valid until the end of the State of Emergency. The same approach was applied with respect to expired Convention Travel Documents of refugees.

-Addressing RSD backlog: Based on the initial analysis of the RSD backlog undertaken jointly with UNHCR in March 2020, the following decisions were taken to tackle accumulation of RSD backlog due to teleworking and suspension of RSD interviews:

(i) Only those cases that had very short timeframe left until the decision-making deadline (six months) and at the same time required a relatively long interaction with the applicant, for example, a complementary interview or reading back of interview transcript were suspended. This comprised not more than 30% of all applications in Armenia;

(ii) In cases where only a short interaction with the applicant was required to proceed to the decision-making phase, remote modality was used whereby all parties to the process communicated from their places of residence. A guidance note on remote interviewing was prepared for the staff and a webinar on the topic was delivered to maintain confidentiality and integrity of the process. To facilitate safe and confidential communication, Office smartphones were obtained and provided to the staff with support from UNHCR;

(iii) Since the RSD interviews were mostly suspended during the teleworking period, the eligibility staff focused on decision-making in cases where the fact-finding phase was completed. In person RSD interviews were resumed in June 2020 while, for a couple of more months, interpreters were attending the interviews online based on arrangements for distance interpretation agreed upon with the service provider.

The measures introduced helped to not only maintain uninterrupted access to asylum procedures and to basic rights and services for asylum-seekers, but also prevented the accumulation of RSD backlog. Thus, despite the unique situation related to the COVID-19 pandemic:

-During first half of 2020, the Migration Service registered more asylum applications (increase of around 30%) than during the same period of 2019.

Due to the relatively low number of asylum applications in the country, the ad hoc measures introduced helped to maintain the functionality of the asylum system and prevent accumulation of backlog, however, more sustainable and long-term measures are required to ensure that the system is able to adapt to changing circumstances, including emergencies. Such measures could include an RSD backlog prevention/reduction policy/plan; formalized internal guidelines and training of the staff, including interpreters, on remote RSD processing; and strengthened technical capacity in terms of equipment, sufficient connectivity, and interviewing conditions at the premises of the asylum authority and the reception facility for asylum-seekers.

In September 2020, the Government of Armenia lifted the State of Emergency, although certain restrictions are still in place. Since end of August 2020, the Migration Service staff has fully resumed regular activities with precautionary measures introduced such as distribution of masks to visitors and measures of physical distancing. The Migration Service does not exclude the possibility of re-introducing the exceptional measures if and when required. Currently, the Migration Service is looking into options for improving and adapting its conditions for reception and interviewing including to make the process safer and more manageable in light of public health risks. The Migration Service is also exploring options for making the RSD processing system more efficient and adaptable including possibly through measures like a centralized scheduling system, appropriate case processing modalities, screening and prioritization of cases, and more efficient segregation of staff responsibilities.