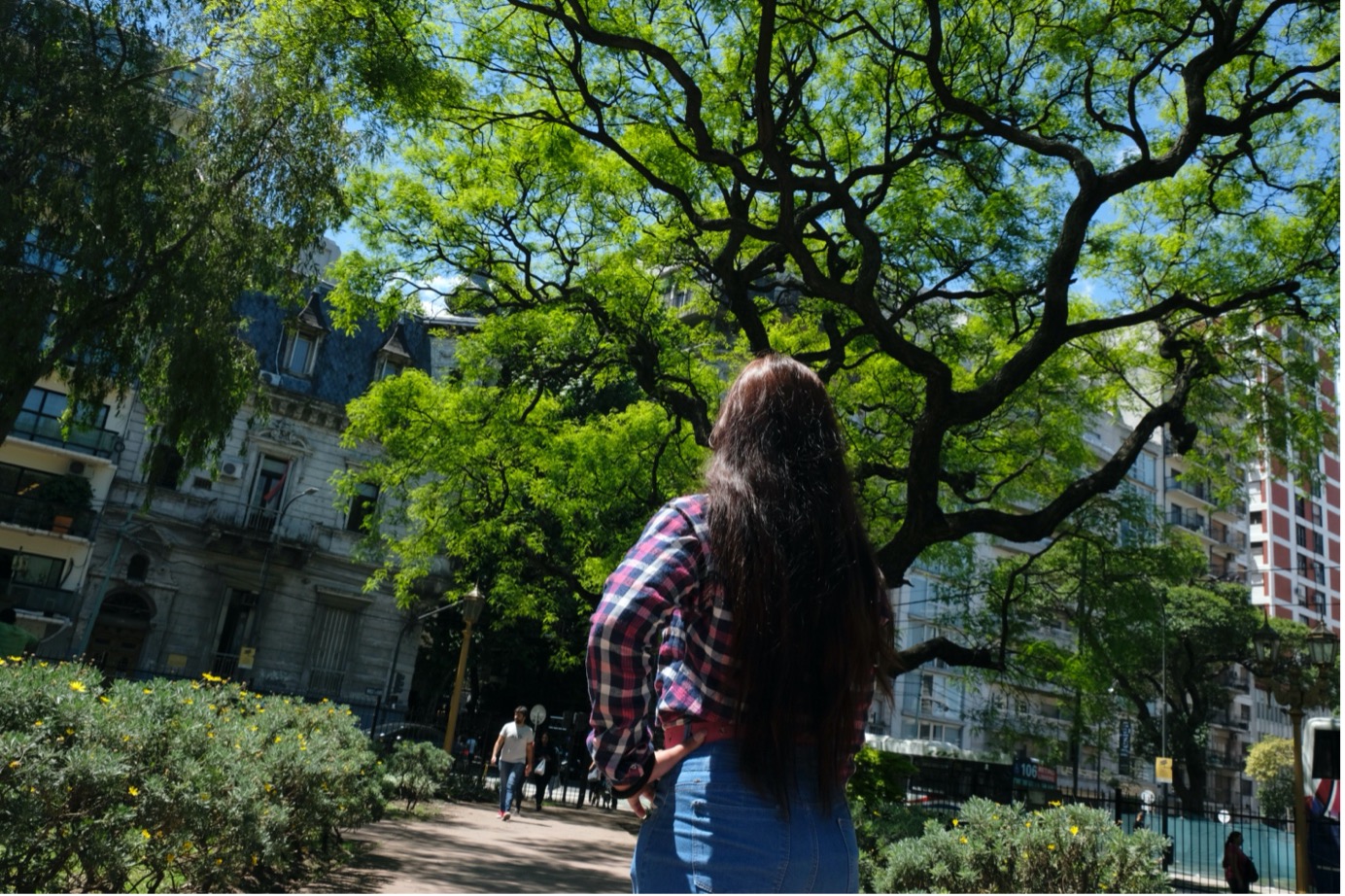 Submitted by: Analía Cascone – Coordinator. Commission for Comprehensive Assistance and Protection of Refugees and Asylum Seekers

In Argentina, since 2012, there has been a mechanism within the framework of the Federal Public Defenders’ Office of Argentina (MPD) to ensure free public legal advice and representation for asylum-seekers, refugees and stateless persons who wish to have legal assistance in the procedure for determining their status.

The MPD, is an independent body with functional autonomy and financial self-sufficiency that, through the Office of the Federal Public Defender General (DGN), is responsible for the defense and protection of human rights, guaranteeing access to justice, comprehensive legal assistance and promoting all measures, as well as designing and executing public policies, aimed at the protection and defense of fundamental rights of people, especially those in vulnerable situations, including refugees and migrants. In 2007, the MPD developed a program for the assistance of the refugee population, which would later be called the Commission for Global Assistance and Protection of Refugees and Asylum Seekers (the Commission). Initially, the program only provided legal representation to unaccompanied children, unaccompanied adolescents and detained adults who were seeking asylum.

In 2011, the Commission approved the creation of the Legal Counseling and Representation Program for Refugees and Applicants for the Refugee Status (Resolution DGN No. 1055/2011). To fill positions in this program, an open call was made for the selection of lawyers and an intensive training course in migration and international refugee law was organized for the shortlisted people (see Modality of selection of the program lawyers: DGN Resolution No. 1562/11).

In 2011, the DGN, the National Commission for Refugees (CONARE) and UNHCR signed a reciprocal cooperation agreement. The purpose of the agreement was to promote inter-institutional cooperation with a view to guaranteeing the full and effective implementation of the norms, principles, and criteria of Argentina’s Asylum Law 26,165. The agreement established three areas of work: legal representation, training, and public information. By virtue of this agreement, the work of the Commission began to be developed in close connection with that of CONARE. When a person presents an asylum application, either before the Executive Secretariat of CONARE in Buenos Aires or in any other part of the country, they are informed of their right to be assisted free of charge by a lawyer. CONARE then adapted its registration forms to include this information and information brochures were prepared in various languages.

The Commission not only assists applicants for asylum and stateless status within the framework of the determination procedure, both in the first instance and in the administrative and judicial appeal instances, but also provides legal assistance and representation to carry out the immigration procedures before the National Directorate of Migration.

In 2012, the General Defender instructed all of its lawyers that, whenever they become aware that a refugee or asylum-seeker is detained, they should use all means at their disposal to prevent the notification to the consular authorities of the country of origin of the asylum-seeker or refugee, and instead notify the Commission without delay so that they can provide support within their jurisdiction (DGN Resolution No. 770/12). Likewise, it empowered the Commission to provide free legal representation in citizenship processes initiated by asylum-seekers or refugees when such intervention is required. Resolution D.G.N. No. 771/12.

In 2019, the General Law of Recognition and Protection of Stateless Persons, No. 27,512, was enacted, whose article 33 expressly provides that “the applicant has the right to be assisted in all instances of the procedure by a legal representative.” This led to the inclusion of stateless persons in the Commission’s Programs.

In February 2021, a reciprocal cooperation agreement was signed between the MPD and UNHCR. The Agreement seeks to strengthen the technical and operational capacities of the Commission and the federal Defenders with jurisdiction at the border, providing them with human and material resources, as well as promoting training activities for MPD members from all over the country, and develop awareness campaigns and information adapted to the population of interest about their rights

In addition to the legal advice and representation program, the Commission works together with Public Defenders Guardians on a program specifically on guardianship, legal representation and accompaniment of refugee boys, girls and adolescents and refugee applicants. Through this program the Commission cooperates with the Public Defenders Guardians in the exercise of guardianship, legal representation and accompaniment of unaccompanied or separated children from their families who request recognition of refugee status.

The Program had a positive impact in terms of standards of the refugee status determination procedure in Argentina. Between 2016-2020, legal interventions were made in 5,029 new asylum cases, followed by legal interventions in 2,355 appeal cases. Support was also provided in application for citizenship cards in 677 cases. In addition, a further 149 cases of unaccompanied children under guardianship were also supported with legal interventions while in 391 cases, referral to federal defender’s offices in other jurisdictions were made in cases where administrative remedies were exhausted. 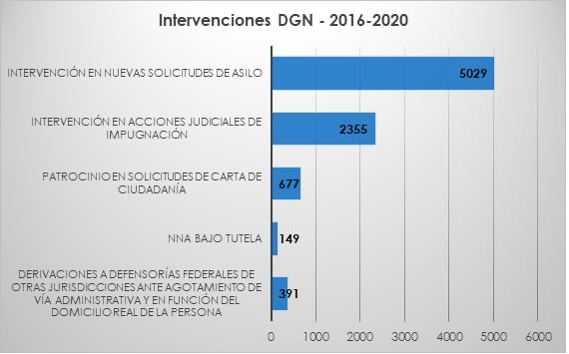 – Need to strengthen the capacity of the ombudsmen with jurisdiction at the border to fully guarantee access to the territory and to the asylum procedure.

– Lack of human and material resources to strengthen aspects of cooperation agreements that are not directly linked to legal assistance (training, public information, awareness-raising, research, etc.) but that are crucial to strengthen it.

– Need to adapt response and service to the increase in requests as a result of the increase in forced displacement of people with international protection needs in the region in recent years.

– Early identification of people with international protection needs that are made visible in other areas outside of the competent asylum actors.

-The limitations on face-to-face legal interventions due to COVID-19 created challenges that ultimately resulted in adaptations in assistance through remote communication channels (telephone, video calls, email, WhatsApp), which evidenced the lack of resources for it.

-With the adaptations made to the asylum procedures, it was possible to request asylum online. Nonetheless, this continued to pose challenges for those without access to technology or who do not speak or read in Spanish.

– It is worth highlighting that the closure of offices during 2020 and the suspension of administrative deadlines also caused delays in the resolution of applications and in conducting refugee status determination interviews.

-Free legal assistance is critical in ensuring access to justice for asylum-seekers and contributes in improving the quality of the asylum procedure.

– Importance of legal representation early in the procedure.

– Need to create and / or strengthen specialized work teams in the field.

– The Public Defense is a facilitator of solutions, in its role as representative of asylum seekers and refugees, for the asylum system as a whole.

– Importance of the interdisciplinary approach to enrich the quality of technical defense.

– Importance of training and the exchange of good practices and experiences with other actors, both nationally and regionally / internationally.

– Importance of comprehensive assistance, in order to guarantee full respect for the human rights of refugees, asylum seekers and stateless persons, beyond the asylum procedure.

– Importance of the holistic approach in those cases in which different processes and problems intersect.